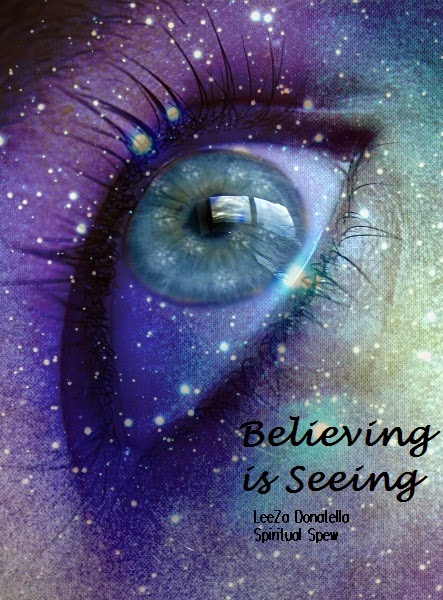 For centuries people were under the impression, like the doubting of Thomas’ what you cannot see cannot be believed.

I'm hear today to dispel that phrase and methodology, because I have come to know the reverse as truth: ”Believing is Seeing.Let me provide you with an example that will put things into perspective.

A group of natives stood by the shore, some wading in the shallow waters, throwing their nets for their daily catch.  One day water broke a little funny, as it were displaced by a large object, although there was none in sight. Or so they thought. Actually there was a large ship that was anchored right off shore.

Okay, so you are probably asking yourself why these natives could not see what was right in front of their facing. Certainly if the phrase, “Seeing is believing” has some validity, then the natives would have seen the ship, right?

But they did not. Why? That’s because “Believing is Seeing.” The natives had no concept of the possibility that something like that could exist, they could not see it.

Reality is the Perception of what we Believe
Let’s go a step further. An oncologist sees a very ill patient who is has tumors throughout his body. The cancer was so advanced that the doctor knew that the man had days to live.  The man handed him an article about a new cancer drug and said, “I think this drug will work for me.” Although the drug takes several weeks to show any results, the doctor gives it to the man. As if by Divine Intervention, the man’s tumors melted away.

The oncologist was surprised, but thrilled by the outcome. For several years the man lived his life cancer free. On one of his bi-annual checkups, he once again handed the doctor an article. This one was about that same drug, although this time it mentioned that studies had shown that it was not as effective as originally thought.  Wouldn't you know; the man’s tumors had returned.

Realizing what was going on, the doctor turned to the man and said, “Oh, I have a more potent version of the drug that I'm going to give to you that is proven to be most effective.”

What do you think happened?  That’s right, the man’s tumors once again melted away.
But here’s the thing. The doctor did not have a more potent version of the drug. He inoculated the man with just plain saline.

Our reality is what we perceive it to be.  When we have perceptions, opinions and believes that are so strong that they're part of our being, then they have the ability to shift the very membranes of our cell structures.

I think it was Dr. Lipton who proved that it is not the nucleus that is the brain of the cell, but the membrane itself. And cells alter to their environment. Think about that the next time you accept a stressful assignment.

Believing creates your Reality
We have seen that you see or not see what is right in front of you based on your beliefs. We have also seen that you can make yourself sick and you can heal yourself.

What else can your beliefs create?  Everything. More on that later.

Sending you the seeds to see what is right in front of you,

Need assistance?
Contact Us at info@leezadonatella.com to receive information and schedule a counseling session to help you move forward.
Awakening