A Path to Enlightenment 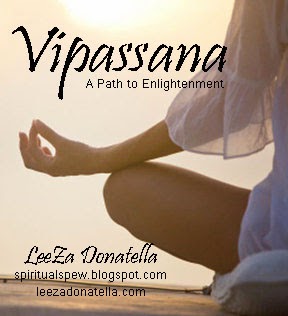 Today’s post is about discovering inner strength and eliminating the misery that plaques most of our minds. I just completed a course at the Vipassana Center in Northern California. I have been off-the-grid in the woods silent for a few days before, but nothing can compare to this recent experience of being silent and meditating for 10 days alongside forty other people. When my friends and family heard that I was going, they all laughed at the challenge for someone like me, the Italian, to be quiet. I knew it would be a challenge, but knew it was time that I found peace f mind at a deeper level.

I left Sedona shortly before dawn and journeyed to Kelseyville. I was nervous, knowing that in a short time that I would have to be silent for 240 straight hours and for the next ten days I would be without the recent love of my life… bacon. As I entered the compound, a feeling of extreme peace washed over me, calming my trepidation.

I was assigned a cabin and promptly deposited my belongings in my room.  I spied someone’s clothes in one of the other two beds and was curious about my roommate. I walked to the cabin's front room to find four young girls sitting on the two beds. Oh, I am the oldest of the group, I thought, as I surveyed my new cabin mates. We still had a few hours before the silence began, so we got all the last bits of speech out of our systems and we became acquainted.  With not one of this fine young women over the age of 24, I was taken aback by the courage of this foursome. And I discovered that each of us either currently or at one time sported at least one dreadlock. The universe was certainly welcoming me with the flavor of my hometown of Sedona, putting the only hippies at this retreat together in one cabin.

As I listened to the stories that brought them to this place, it gave me courage, as I contemplated the courage of these young women undertaking such an arduous task.  I tuned in and felt their energy, each different, yet all filled with love. There was Amanda, originally from Sweden, whose alabaster skin complimented her light eyes; a single dread hidden among her long golden blond hair. She was the only true Vegan in the group. As I looked upon her thin physique, I was a little jealous, thinking of how easily it was going to be for her to get her legs into a meditation position.

There was Camille from San Francisco, whose medium length dark hair gently framed her slightly rounded face.  Her outlook on life was positive, as she shared some of her history. She reminded me a lot of myself twenty years ago, with her bubbly personality and infectious smile.

There was Hannah, an endearing young woman of twenty-one years, whose full head of dreads were tied in a ponytail.  I felt an instant kinship to this youngest of the group. She reminded me so much of my young friend Kate from Sedona. The wonder of the world sparkled in her eyes, and her energy was a combination of courage and innocence. It was obvious to me that she had stepped out of the comfort zone of a more traditional upbringing to embrace life outside the two-by-two illusion that most of us are brought up believing. I give her the most credit for looking at life in a different way as she discovered herself.  Her eclectic style evident by her handmade creations. I smiled as I looked upon her, like a proud older sister.

Then there was my roommate, Camille from Canada, whose beauty inside and out lit up the room. She was the tallest and quietest of the bunch.  I thought, wow, silence should be easy for this gal, her words always carefully chosen.

Just as I thought our group was complete, right before silence began, we had a late arrival. Her name was Renae. She was dark with short black hair, her shyness apparent as she kept to herself, her eyes showed the pain she was experiencing. I did not know what it was, just that it was there.

That first evening, there was a group orientation and instruction on the meditation technique. My heart beat hard when the noble silence began, not knowing if I had the fortitude to be silent for 240 hours as I closed my trap for the first time in decades.  They were all business as the girls who so openly and effortlessly chatted just a few hours before, became silent. There would be no more laughter, singing, glances, eye contact or talking. I was in it and there was no turning back now.

The next morning came too soon as the bell rang at four o’clock. It was time for my first full day of meditation and I enthusiastically jumped out of bed and quickly got dressed. The sky was still black and the cold air bit my face as I made my way to the hall along with the many other early risers. In silence, I found my space and sat down folding my legs into the best lotus position I could. I closed my eyes and concentrated on my breathing. There would be no visual, no mantra that I would perform for this technique and I had difficulty, continually bringing my wandering mind back on point until the breakfast bell rang. It was only six-thirty in the morning, yet my stomach was feeling as if I had not eaten in a few days as I made my way to the dining hall. It was hard not to glance at anyone as I stood in line, waiting my turn. After breakfast it was back to the hall for more mediation until lunch, then a similar routine before evening tea and fruit. The night ended at nine o’clock after the discourse and final evening mediation. I smiled as I laid down in bed that first night, proud that I had been silent for the entire day.

When the bell rang for day 2, I found moving difficult, my muscles tight and sore from the hours of mediation from the previous day. I wondered if my cabin mates had any idea of what pain felt like; their young bodies still nimble. I made my way to the hall and smirked as I saw most of them piling pillows around their meditation space. Ah, I thought, so I am not the only one feeling the pain I am not alone after all. They all sat there, enduring each and every minute along with me.

Now I had to show them my strength; that the eldest of the group could sit strong. After all, I just spoke to a women’s group before leaving Arizona about empowerment and strength telling them “Women,we are strong and mighty.” It was time I acted like it, regardless of the pain I was experiencing. I smiled as the pain came, and with time, it eased, showing me the impermanence of everything in life. Each day’s silence became easier as I looked forward to mediation. My mind was mostly quiet as I embraced the pain and other sensations in my body as an observer. My nightly dreams resolutions to past relationships and situations.

As each day came and went as I was determined to keep my mind from wandering while mediating. During this one hour rest, however, I let the ideas fly, not turning off my brain as articles and chapters a-plenty swirled in my head. And I allowed my taste buds to be tantalized by the wonderful love-filled culinary vegetarian creations prepared by the volunteers, although my overall appetite was almost gone. I blessed those culinary angels, hardly missing my staple love, bacon.

I was changing, becoming lighter, more filled with the Divine Love within.  I could see the changes in my cabin mates as well; the energy around Camille from San Francisco, growing brighter than the small lantern she swung in her right hand as she made her way the hall in the dark sky; Hannah’s effervescence never faded, her unwavering determination showing me her strength; Amanda becoming more perky with each morning that passed; and Renae, who had the most difficulty with stillness in those long meditations became statuesque; her strength from within now coming to the surface.  My roommate Camille, the gal from Canada, impressed me with her undying power. Not a hair or muscle moved as she sat in silence. She was the first to arrive and the last to leave for each session.

When the last day arrived and we were once again able to speak, we shared our stories.

As I made my way to the common area I got to speak to another women whose glow and inner love resonated with me. I had watched her for the last week of the Vipassana, as she briskly traveled the walking trails during break time, while I secretly created art with the pine cones, leaves and small stones, spelling out peace and love everywhere. Ah, a kindred spirit, a sister, I thought, as I sensed a camaraderie with this women who shared a similar bubbly energy to my own.   Her name was Alexis Carra, an actress, starring in a sitcom called Mixology airing in February 2014. In speaking to her I discovered that she was as beautiful on the inside as she was stunning on the outside. I smiled, knowing she will continue to attract wonderful opportunities in her field, due to the inner love that she so freely shared with others.

The retreat was now over and although my thighs and knees were ecstatic, I would miss this place. It was a hard 10 days, yet the most rewarding of my life and I was happy that I had the discipline and determination to stick it out. I decided to change my plans and instead of heading north, I went south to San Francisco, offering two of my cabin mates who were travelling that way a ride. We said our goodbyes but have already met up as we all continue our individual journeys of love and peace.

I am most thankful for being able to spend time and witness such amazing strong young women. They have provided me with hope about the women who will take the reins when their older sisters are no longer. So thank you Amanda, Renae, Camille from San Francisco, Camille from Canada, and special thanks to you Hannah. You have all shown me your strength and for that I am truly grateful.

Here are some links of items that you may find helpful:
Music
Meditation Pillow
Essential Oil Candles

Love and Blessings now and always,