on April 18, 2012
Update added August 20, 2013THE BOOK ABOUT SPIRITUAL GROWTH IS COMING IN SEPTEMBER. I have been told it is a cross between the Celestine Prophecy and 50 shades of Grey
email LeezaDonatella@gmail.com if you are interested in joining the mailing list for announcement

For those who have already read the previous blog posts in the series about John of God - Series, today's post is a continuation of the series based on my personal experience as a visitor to the Casa, specifically gifts I received at the Sacred Waterfall. 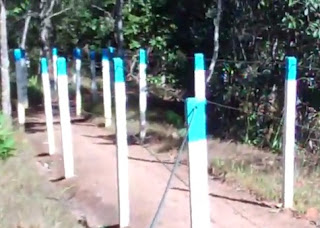 The base of the path is lined with ropes hand rails to guide visitors into the sacred spot. You cannot take pictures of the waterfall itself, but I was able to find a snapshot of the path so you have an idea about what I am describing. There was a group of women waiting at the base that invited us to join their group as they awaited a group of men currently in the Sacred Waterfall to exit.

As the men exited, we proceeded further one by one holding the rope. After about 25 feet, the dense vegetation opened up to a clearing, the size of an ample living room surrounded with floor to ceiling as well as overhead greenery. Small rays of sunshine occasionally peeked through the thick canopy.  The falling water was not as intense as my imagination pictured it, possibly due to the time of year (April) that I was visiting the Casa. If I am going to be was shy about my body I better get over it fast, I said to myself as we all shed out clothes. We all moved onto the flat stones that comprised the bottom of the waters basin, being careful not to slip. They water was frigid and we slashed ourselves for healing.  All I could think was “darn” this is cold! Ok, I admit, “darn” is not the word I used when taking to myself. Perhaps the spirits make the water so cold so people do not take too much time in this place, I laughed to myself.  I did feel refreshed when I exited and got dressed. I figured that spirit has some reason for me freezing my buttocks off so I will go with the flow. I just was not quiet sure what the reason was.  I did visit the Sacred Waterfall a couple more times before I left Abadiânia and it was the final time where the reason became clear. I am glad that spirit provided me with the opportunity.
Toward the end of my trip, I asked as part of my revision visit to John, the visit where you go before John right before you leave Abadiânia, if I could visit the waterfall alone. Perhaps it was because I assisted in the soup preparation that they allowed be to go to the Sacred Waterfall on my own.  So I headed down the path, waited my turn, and entered the Sacred Waterfall area.
As I disrobed, I saw this very different butterfly. The texture of this insect was like one of those velvet Elvis paintings.  The butterfly’s body was black with one horizontal neon-orange line and one horizontal neon lime-green line painted on its back, one in each main body section. Ah, I have an admirer, I thought as I chuckled to myself.
I was so very excited to be in this place that I began to sing. I made up a song giving thanks to the Casa and the spirits. Yes the water was still frigid but I sang my made up song, smiling in my heart as I splashed myself and gently cleansed the crystals I brought with me. I had finished my little visit, I noticed my little insect friend still sitting on the rope guide, smiled and included him in my song as I dressed.
I looked around and eyed my new insect friend one last time as I slipped my feet into my flip flops. As I looked up I was astonished to seem want seemed like 100 pairs of these butterflies fluttering about this enclosed space.  They were everywhere. But how? It was less than a couple of seconds between the time I looked at the area to the time I looked down to slip my feet into my flip flops and back up again!  I gulped in awe,  motionless and for the first time, for those who know me, speechless.
It was a miraculous moment that I still carry with me as vivid as the day it occurred.  When I could finally move again, I began singing louder, in thanks and smiling as I left the Sacred Waterfall area, skipping all the way back up the hill to my pousada (inn). My joy was so intense I could not contain myself.   I shared my experience with new friend from Hawaii, Yoni, who helped me confirm this special gift just for me.
Seeing yet another dimensional shift in less than a week first Divine Fragrance then instantaneous manifestation of lyrical beauty to tangible beauty (song to butterfly) was definitely an increase in consciousness. The Casa was truly fulfilling the wishes I entered on the paper!
My next post will discuss the healings I witnessed and will be my final post in this John of God series.
My Book about visiting John of God is now available on Amazon

Links of items I enjoy, that you may find useful
Berkey Water Filter  The only filter I've found that removes fluoride from drinking water. We filter fluoride from our drinking water to decalcify our pineal gland to connect to increase our spiritual awareness. (article on the Pineal Gland)
Spiritual Guide Incense I love this incense that gets me into the zone.
Great Meditation Music
Comfortable Meditation Pillow
Essential Oil Candles
Chakra and Healing Stones

Other authors books that have helped me on my journey.
The Four Agreements by don Miguel Ruiz
The Celestine Prophecy by James Redfield
The Essential Rumi  by Jalal al-Din Rumi
Carlos Castaneda's books

Leeza Donatella is an author, speaker and teacher
Website