For those who have already read the first blogs about John of god.  John of God - Series 1 and John of God – Series 2, today's blog is a continuation of the series based on my personal experience as a first timer visit to the Casa. Of course, as other visitors, by the end of my stay I was no longer a novice.  I will not rehash much of the prior posts, but jump right back to Wednesday morning in the first timers line.
This experience is pretty interesting I thought to myself while I looked around the main hall to see people on crutches, in wheelchairs, with canes, coke bottle glasses or blind walking canes. There were people of all ages from the very young being cradled in their arms of their parents to the very old, all dressed in white as is strongly suggested by the rules of the Casa. And the energy n the hall was calm and peaceful. It was nothing like I imagined with hundreds in a single space. Back in the states, I would never pick up such a calm energy from such a large group of people. 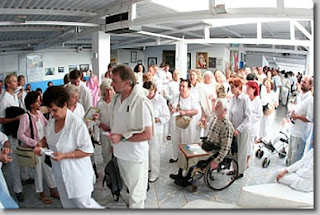 As a first timer, I had my intentions written on the slip of paper, they were translated to Portuguese, and I waited in the main hall of the Casa for my queue to be called. The queue of folks that would sit in the current rooms, were already in the rooms in prayer and meditation for what seemed to be a long time now. I would find out later that there were other things going on in the rooms prior to the first timers seeing John and will discuss these in future posts in this series.  I had no idea what to expect, so I tried to keep my expectations to a minimum and not channel spirit for answers and just go with the flow.  For those who do not personally know me, I tend to get pictures of what is to be, so surprising me is not easy.

The first timers were finally asked to line up. Anyone in a wheel chair or who needed special assistance was brought to the front of the line.   We were instructed to be silent as the door to the rooms leading to John was opened with attendants allowing a dozen or so people entry before closing them again.  I was at the back of the line, which permitted me to see all unfolding in front of me. The queue slowly moved forward as more people entered. It was about 30 minutes from the time we were asked to line up until I entered the first of the current rooms. It was warm and humid with the only sound being fans placed in strategic points. Rows of pew like benches filled both sides of this first room with not an inch of wood showing as each bench was completely filled with people dressed in white, eyes closed, in silent prayer or mediation. 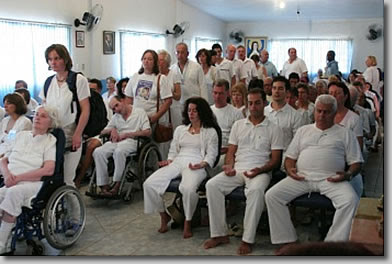 I glanced left and right to see painful expressions in the faces of the rooms inhabitants, most likely from sitting for such a long time, and remembered that not everyone is accustomed to long periods of meditation.   The line made a sharp left turn as we entered what is called the medium room, where John is located. The energy in this room was more condensed, thicker in some way.  I could now see John from where I was standing and his face as puffy and bloated. He did not look like his pictures, and my first thought was, gee how old were these pictures that he has changed that much.
Finally I thought, as I handed my slip of paper to the attendant. As mentioned in prior posts, I asked for items that would increase my consciousness. John touched my hand, whispered something to the attendant and I was provided with verbal and written instructions and ushered off to the next room. My instructions were to purchase the passion flower herbs and sit in the current room for the rest of the weeks sessions with “surgery” scheduled on the Friday afternoon session.  As I exited the room, I passed through one of the surgery rooms, then out into the courtyard where the people who had surgery or seen John that session were already enjoying the spiritual soup the Casa offers to its visitors. A pleasant faced local woman, not at all like the soup Nazi from Seinfeld, handed me a bowl from the serving window and I found an open place as one of the many tables in the courtyard. I enjoyed the vegetable soup and stories from my fellow table mates on why they were here in Abadiânia and the stages of their healing.   After my meal I found the “pharmacy” where they dispensed the passion flower herbs and returned to my posada for some quiet contemplation prior to the 2 pm session where I would be sitting in the current room.
My next post will discuss some of the interesting lessons and divine intervention, I encountered in these rooms.

Links of items I enjoy, that you may find useful
Berkey Water Filter  The only filter I've found that removes fluoride from drinking water. We filter fluoride from our drinking water to decalcify our pineal gland to connect to increase our spiritual awareness. (article on the Pineal Gland)
Spiritual Guide Incense I love this incense that gets me into the zone.
Great Meditation Music
Comfortable Meditation Pillow
Essential Oil Candles
Chakra and Healing Stones

Other authors books that have helped me on my journey.
The Four Agreements by don Miguel Ruiz
The Celestine Prophecy by James Redfield
The Essential Rumi  by Jalal al-Din Rumi
Carlos Castaneda's books

Leeza Donatella is an author, speaker and teacher
Website