How to Deal with Office Politics 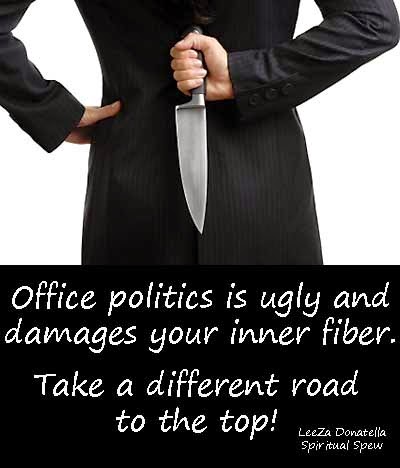 Do any of you work in an office environment?

If you do, then you know that office politics within an organization is nothing new. It’s been around since the creation of the office.

But do you know why it exists and the best way to react to it?

For the people that are the perpetrators of this bad behavior, know that it comes from one or several fear based emotions like arrogance, criticism, cruelty, jealousy, insecurity, judgment, worry, envy or disdain and it's a cancer that can spread throughout an "organ-ization."

These people may feel threatened by your abilities or perhaps they think that you want their job.  It's  been scientifically proven that these fear based emotions are draining, unbalancing both the body and the mind to the point of chronic and life-shortening diseases.

Instead of reacting and allowing your feelings to move toward a corresponding fear based emotion, look on these people with compassion. You’ll be happier and healthier.

Like a sail with no wind, if you ignore it, you give it no power. Remember that your candle does not glow brighter by extinguishing someone elses.

Now I'm not saying that you should be a doormat by any means. You can be an incredibly nice and giving person, but when that political individual or clique interferes with or tries to undermine your productivity, don't be afraid to show them what you’re made of and that you're a force to be reckoned with, but do it with kindness. And don’t feel like speaking to management is out of the question. If your manager is a good one, then they're already aware of the issue and will work with you, not against you.

As I write the above I am reminded of the story of the Buddha who took a vow of celibacy. The elders in the town knew how strong the Buddha was as his following increased. They persuaded a young woman who attended his classes to say that the Buddha had impregnated her. With a large piece of rounded wood under her garment, the elders brought her to him amassing a crowd as they gathered in the courtyard.  They accused the Buddha of repudiating his vow and taking advantage of this innocent woman. The Buddha turned and outstretched his arm, pointing his finger toward the woman saying, “You know the truth.”

With those words, the wood fell from under her garment for all to see.

I leave you with these words. Office politics can be ugly and damages the inner fiber of those who participate in it. Show others the strong fiber you're made of and take a different road to the top!

Wishing you a day filled with compassion and love