Indica and Sativa – Lessons in Misunderstandings 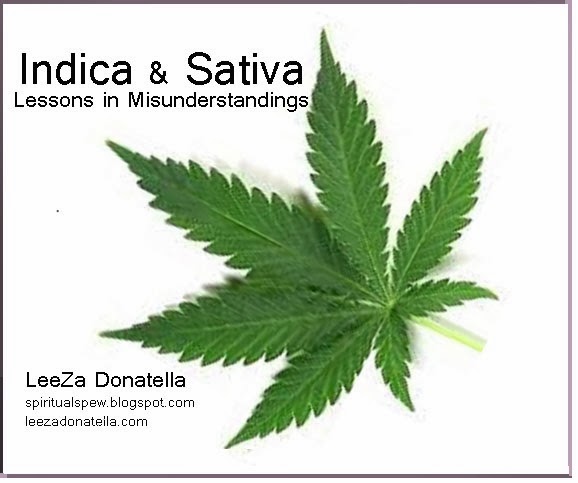 Called by a plethora of names: marijuana, weed, pot, ganja, herb etc., it’s been exulted as well as criminalized.

Today I write about something that until recently, I knew little about, CANNABIS.

I am not someone who smokes this herb, but found myself doing research on this topic for my first novel, The Awakening. With this new found knowledge it was time that I joined this conversation.

Before my research and total emergence in cannabis history, legislation and medicinal benefits, I was not a fan of nor did I have an understanding.
Since then, I took it upon myself to find out more about what made having a puff help curb that sick feeling in the stomachs of cancer patients and alleviate pain in others.

Botanical Information and Strains
Marijuana and cannabis both have the same meaning. When we talk about the family and genus information, which is readily available over the Internet, libraries and other sources of botanical literature, we use the term cannabis. In the Genus Cannabis, family Cannanaceae, the are three species:
Some may argue that Hemp is a single species, but let's not split hairs for the sake of this article. In today’s medical use market, growers have created different hybrid varietal strains, each with its own particular characteristics to enhance certain medicinal effects. There are more strains than types of ferns, but just to name a few we have: Orange Crush, OG Kush, Grand Daddy Purple, Jack Herer or Trainwreck.

Spiritual and Creative Uses
For centuries, people used cannabis as part of their ceremonies, allowing them to better connect to their divine spirits and deities. Creative types like artists, musicians, writers and philosophers say that it allows them to more openly channel inspiration.

Medical Facts and Benefits:
The main active ingredient in cannabis is THC (tetrahydrocannabinol, or delta-9-tetrahydrocannabinol), impacting the autonomic nervous system expanding the breath and allowing more oxygen into the lungs and cells, when ingested, inhaled and whatever other methods used to administer to the body.
.
From disabledworld.com
“Few herbs offer a wide variety of therapeutic applications like these:
Other Uses:

There are even rumors floating around about super concentrates of cannabis oil applied topically curing different types of melanomas.

From Infoplease.com
“Marijuana has been used as an agent for achieving euphoria since ancient times; it was described in a Chinese medical compendium traditionally considered to date from 2737 B.C. It also has a long history of use as a medicinal herb. Its use spread from China to India and then to N Africa and reached Europe at least as early as A.D. 500……”

“Marijuana was listed in the United States Pharmacopeia from 1850 until 1942 and was prescribed for various conditions including labor pains, nausea, and rheumatism.……”

The DEA museum site also confirms it as a source of use dating back to 2700’s BC.

Legislation
The Controlled Substances Act of 1970 classified marijuana along with heroin and LSD as a Schedule I drug.

I have not even touched the use of hemp as a fiber that would save our forests and keep the world oxygen rich.

What I question is why did the government decide that it was bad for us after all its historical use and benefit? This is the question that I have had trouble wrapping my brain around.
And, although the legislation in the US is becoming more “intelligent” and loosening the reins a little on this subject of cannabis, we still have a long way to go.

Most women would be ecstatic losing 3-5 pounds a week, but trust me, when you are starving and continually nauseous and nothing helps, it really is something you would not wish on anyone.  I believe so strongly in medical marijuana after seeing the results when I needed to use it that I incorporated it into the story line in THE AWAKENING, the first in the Beyond the Veil of Illusion Series. The chapter is aptly called Indica and Sativa.

So, for the folks that did not have this information before, yes, cannabis has been around longer than Christ and has multi-benefits. I think that any substance taken in moderation like coffee, chocolate, bacon, alcohol, and cannabis is not EVIL or the Anti-Christ.  It’s when we obsess over them and abuse them…. that is where the problem begins.

Of course if you smoke too much marijuana then get the munchies, you might eat that entire box of chocolates, and well....that would be two obsessions/abuses at the same time.

Like with everything, use your head and act responsibly.

Wishing you a day with LOVE and a spiritual presence,